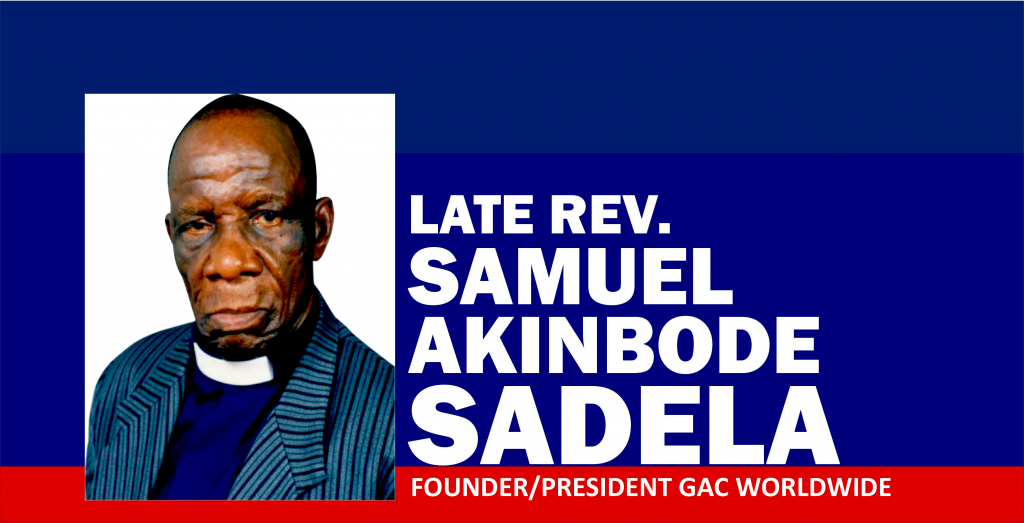 Rev. Samuel Akinbode SADELA was born in the last Saturday of August, 1900 at Ifon, Ondo State, South-West, Nigeria. His parents were Chief Olomonehin SADELA of Imoru (Second in command to the Olumoru of Imoru) and Princess Adetiye SADELA.  A princess in the Adaniker ruling house in Ifon. It was not difficult for him to remember the year of his birth because it was the year the District Officer (a white man) under the colonial rule assumed duty at Ifon.  Hence he was fondly called “Aboyinbode” (which means born the same year the white man arrived) by his parents, relatives and friends from childhood till he became adult. Though, his father came from the Olisa Chieftaincy House of Imoru, he was living at Ifon at the time of his birth.  His grand -father – Adidi was a warrior of repute, but Reverend Samuel Akinbode Sadela is a warrior of Christ Jesus.

In 1902 as a toddler little Akinbode was taught how to read the Holy Bible by the angels of God.  Surprisingly, he could not read any other book apart from the Bible by then.  One day the angels gave him a fruit of the tree of life to swallow which he did.

He completed standard six education in 1920.  He was an active member of the Boys Scout.  He narrowly missed an opportunity to travel to England in 1925 as part of the Nigerian Contingent of the Boys Scout.  He could not make the trip because his father was indisposed. He passed the Senior Cambridge in 1946 and London University Matriculation in 1949.  Simultaneously while he was studying for Cambridge and Matriculation examinations; he was a correspondence Law Student of Woolshall College, London.  He studied Law for 3½ years and he was qualified to go to the Law School in London for 9 months after which he would have been called to Bar. When he informed Apostle Babalola he was advised not to go and he sacrificed the legal profession for the work of God. Apostle Babalola predicted that a time would come that Rev. Sadela would be surrounded by various professionals (Particularly Choristers with Musical Instruments) working with him in the vineyard of God.  To the glory of God, today the prophecy has been fulfilled.

Midway through his primary education he left Ifon in 1914 for Sapele in the present Delta State of Nigeria where as a houseboy he served Captains Pullen, Balmour and Gavin who were whitemen District Officers in the colonial government.

Meeting with great men of God

In 1928 he met the legendary Prophet Moses Orimolade, the founder of Cherubim and Seraphim Church. Prophet Orimolade prayed for him and said he would be a great servant of God. He also met the famous Prophet Orekoya in 1930 when he (Orekoya) stopped over at Ifon on his missionary journey to Sapele. Finally in 1931 by Divine Connection he met his leader and mentor, Apostle Joseph Ayo Babalola at Oke-Oye, Ilesa, South-West Nigeria.

He was baptized by sprinkling of water on the forehead in 1928 at the Anglican Church, Ifon. Later in 1931 Apostle Joseph Ayo Babalola baptized him by immersion.

He served faithfully as Part-Time Minister in Christ Apostolic Church from 1932 to 1937 when he was ordained a Full – Time Minister of God. As a Part – Time Minister he established many branches of the church in Ikale – land in the present Ondo State of Nigeria.

He travelled through most part of the South-West Nigeria with Apostle Babalola. They ate together in the same plate, slept together on the same bed, trekked together and travelled together in his (Babalola’s) car which he bought in 1948. It was in the same year 1948 that both of them fasted for 40 days and 40 nights. It is similar to the fasting of Moses, Elijah and Jesus Christ in the Bible.

Rev. Sadela attended an International Conference of Ministers of God tagged “Amsterdam 83” in Holland in 1983. The Conference was organised by the renowned Evangelist Billy Graham of USA. Also in 1990 he went on speaking engagement to Emmanuel Bible College (formerly Armenian Bible College) in Pasedena, Carlifornia, USA.

In 1959, just 2 weeks before Apostle Babalola passed on to glory, he (Babalola) instructed Rev. Sadela to establish a church with the word “Apostolic” in the middle of it’s name. To carry out the instruction, he established Gospel Apostolic Church in 1972. The church now has several branches in Nigeria and some overseas countries.

Patron of CAN and CPFN

Challenges Faced In His Ministry

Rev. Sadela is passionate about the ministry committed unto him. For instance in 1944 (during the 2nd World War) he trekked from Odo – Owa to Ilorin and back a distance (round trip) of 112 miles (180 Km) in company of Elder Balogun (Baba Ijo) and one Victor on a missionary journey. He was also reputed to have travelled the length and breadth of the South-West Nigeria on bicycle for missionary journeys. Some of the other challenges he stoically waded through include the following:-

– He suffered the loss of seven children to infant mortality in his first marriage consummated in 1934.

– He narrowly escaped death in a motorcycle accident in 1948.

– His second marriage in 1965, ten years after the demise of his first wife, was blessed with 2 surviving children, a male and a female both who have Master Degrees from the University of Lagos and are happily married with children. Both of them are playing prominent roles in the Church.

– In the year 2001 he lost his very dear wife Madam Julianah Anike Ajisomo Sadela at 62 years of age.

Signs and Wonders Following His Ministry

For the 81 years that Rev. Sadela had been preaching, clouds of witnesses had confirmed his call. Some of these are:

Source of His Strength.

– He believed there is no middle way in commitment to serving God. He has an uncommon passion for the Lord Jesus Christ. Mark 12:29-31.

– As an Apostle of the New Testament he believes in the pre – eminence of our Lord Jesus Christ. Hence he says the words of the Lord should always supercede that of any other person dead or alive Matt 7:24; Col 1:15-19.

– He believes once you are truthful and faithful in your relationship with God and man no evil can subdue you. I John 4:4

– He believes longevity is the inheritance of all obedient and faithful children of God. Isaiah 65:22; I King 3:14

– He believes that since the Holy Spirit who cannot grow old, dwells in him, he will be spiritually sensitive till the end of his life. Deut 34:7;

He believes in the undiluted and unadulterated word of God and that the miracle of God is different from the magic of men.